In 2019, the Australian Dental Association (ADA) reported on a surge in popularity of teeth whitening. Teeth whitening is a very popular choice for people who wish to have whiter, brighter teeth, free from stains coming from red wine, certain foods or smoking. However, the benefits of having whiter teeth extend far beyond the cosmetic aspect, with people noticing decreased amounts of oral bacteria, as well as increased self-confidence.

If you’re thinking about whitening your teeth, you want to have all the information you need so that you can make a clear choice. For example, you might want to know more about: 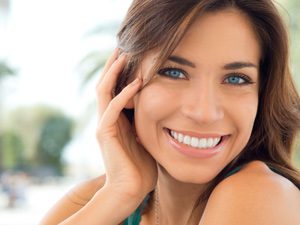 Please look at our frequently asked questions to help you decide about teeth whitening.

1. What is teeth whitening gel made of?

2. What’s the difference between hydrogen peroxide and carbamide peroxide?

Skip to the next question if you don’t want a more scientific explanation!

Both compounds contain the two hydroxyl groups, which facilitate teeth bleaching. They both act as strong oxidising agents, and can cause skin irritation and eye damage at high concentrations. Please note that dentists and cosmetic whitening salons do NOT use peroxides at concentrations high enough to cause these oxidising effects.

3. Does carbamide peroxide have a longer shelf life than hydrogen peroxide?

Because carbamide peroxide is a more stable compound than hydrogen peroxide, it has a slightly longer shelf life. As this difference is only slight, both whitening agents benefit from being stored in a refrigerated environment. Both peroxide compounds will be less effective if stored at room temperature.

Both compounds provide effective whitening results. However, because hydrogen peroxide is faster-acting, it does give whiter results more quickly.

5. How long does a peroxide treatment take?

6. Is one peroxide better for people with teeth sensitivity?

When applied correctly and using appropriate concentrations (6% for hydrogen peroxide and 18% for carbamide peroxide), it’s rare for patients to experience tooth sensitivity. Patients can use tooth mousse and desensitising toothpaste with their teeth whitening treatments. Using these products will help to reduce teeth sensitivity.

7. Does one agent cause more rebound?

When teeth appear lighter immediately after whitening but lose brilliance after a short time, this is called rebound. Neither hydrogen peroxide nor carbamide peroxide cause rebound, and our whitening agents contain higher water content to keep the teeth hydrated and reduce rebound.

8. Are there laws in Australia about who can apply teeth whitening treatments?

9. Teeth whitening at a dentist vs at a salon. What’s the difference?

10. How long does teeth whitening last?

When you have a teeth whitening treatment in the dental chair, you can expect results to last for 6-12 months, after four whitening sessions each lasting 15 minutes.

When you have a teeth whitening treatment in the comfort and privacy of your own home, they should expect to undertake at least four applications in the first week to achieve noticeable results. Follow-up at-home whitening usually requires ongoing weekly treatments.

11. Do I get a personalised, fitted mouthguard when I get my teeth whitening treatment?

When you select a dentist for a whitening treatment, you will receive a customised mouthguard. It’s an individualised, custom-made tray to apply the whitening gel. The tray is similar to a mouthguard but much finer in structure.

If you choose an at-home treatment, you’ll receive the whitening agents and the trays, which you then affix to your teeth for the recommended time. At-home kits also include a set of instructions about tray care and storage.

If you come to the dental clinic for in-chair whitening treatment, you’ll also receive your set of individualised gel trays. The dental clinic stores the trays on-site for repeated visits.

Because cosmetic salon operators are not trained dental professionals, they cannot supply an individualised set of whitening trays for each customer. Using trays or mouthguards which aren’t individually customised can lead to burnt gums or patchy whitening gel application.

12. Are dental examinations included in the price of in-chair whitening treatments?

Are you ready for a brighter smile?

When you know that all dental practitioners at our Richmond clinic are experienced teeth whitening professionals, you can feel happy choosing our clinic. Our people have ongoing and updated training in this area and they’re skilled and caring during all stages of the treatment. Our in-chair and take-home offerings use Zoom whitening products. The Zoom LED light therapy is an integral part of the in-chair whitening experience.

We will partner with you to help you get that dazzling white smile you’ve always wanted!